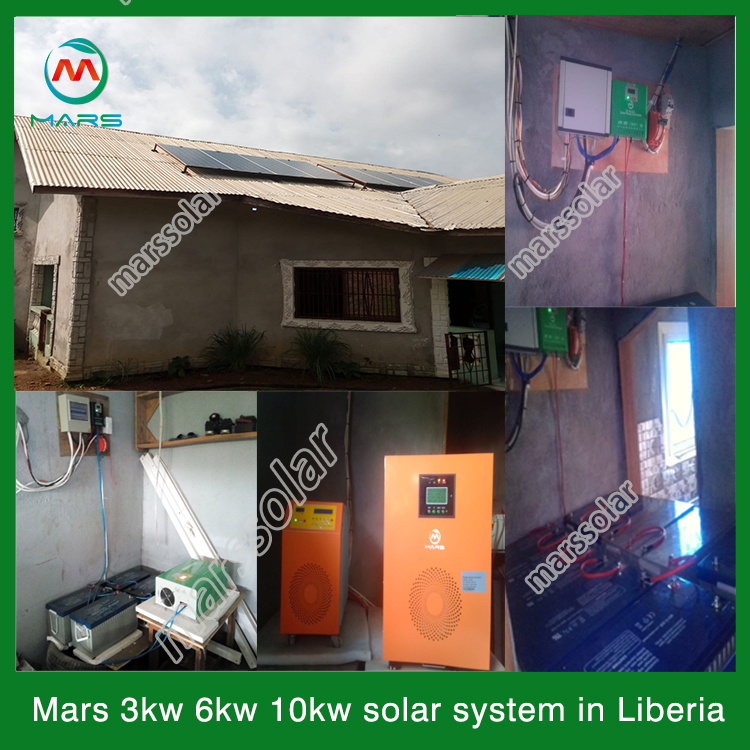 Alphonso from Liberia demonstrated a good solution for us. A few years ago, Alphonso bought a 3KW basic off grid solar system at Mars Solar. After the solar kit with battery and inverter has been running normally for a year, he wants to open a shop.

There are 2 refrigerators in the shop, because the refrigerator is an inductive load, it will generate a large starting power at the moment of starting. Therefore, his 3KW inverter cannot meet the starting power requirements of 2 refrigerators. At the suggestion of Mars engineer, he bought a 10KW IGBT inverter and supporting solar controller. In this way, even if two refrigerators are working at the same time, the IGBT inverter can understake it perfectly. Every time the compressor of the refrigerator starts to work,the starting power generated in an instant hits the inverter, but the IGBT inverter is stable enough, so the stability of the solar kit with battery and inverter will not be affected. The inverter can have a large capacity and can carry a lot of household loads. Alphonso wanted to increase the working time of the solar kit with battery and inverter by increasing the capacity of solar panels and batteries.Therefore, after a period of time to save some money, buy a part of accessories, and gradually assemble a larger and larger solar kit with battery and inverter.

Still hesitant because you don’t have enough money to buy a 6kw solar system kit? Please consult Mars Solar for the best solution!